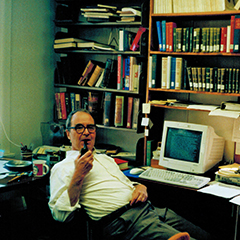 Gil Kelly served as Managing Editor of Publications from 1983 to 2013.

Gil Kelly was an old soul. He lived a singular life. Yet, with great relish, he scattered gems of his knowledge, wisdom, and interests on the people around him, often amazing and sometimes baffling them with the extent, erudition, and oddities within his purview. He saw a pattern and logic to things, which at times could be challenging for his interlocutors to comprehend. The mechanics of design appealed to his aesthetic sense, so he preferred manual typewriters over electric, electric over computers. Blue pencil, typescript, and linotype machine were his MO for publishing a book.

He arrived at the Omohundro Institute in 1983, bringing a deep reservoir of intellectual and editorial expertise gained from his academic training with a Ph.D. in English literature and his time as a book editor at the University of Nebraska Press. In his thirty years at the Institute as managing editor of book publications, he influenced the lives of hundreds of people, professionally and personally. He imparted to authors, fellow copyeditors, and graduate students in the Institute’s Editorial Apprenticeship Program the importance of scholarly principles and careful, detailed editing. His theoretical attention to expository practice, grammatical structures, and punctuation’s purposes honed clarity of meaning in many a manuscript. During that time, he copyedited more than fifty books in early American history and literature, many of them prize winners, including three Bancrofts.

Gil exhibited extraordinary institutional loyalty and took seriously his responsibility to uphold the Institute’s scholarly publishing standards. He thoroughly enjoyed delivering disquisitions to the editing apprentices and interrogating them about their preferences in cars and beverages. He brought to bear on many a manuscript his knowledge of Augustan English literature, Latin, and Greek, saving authors from embarrassing blunders. Gil served on the Committee on Training in Publishing Procedures in conjunction with the Ferguson Seminar in Publishing for students at the College of William and Mary. He also acted as a consultant to students on pursuing publishing careers and turning dissertations into publishable books. To the very end, his former colleagues and students turned to him for his comprehensive grasp of book editing and publishing.

Shortly before he retired, he purchased a silver Porsche Boxter that gave him joy and made him young at heart. He took on the air of a bon vivant, giving female friends a spin in the Boxter with the top down. His first priority in retirement was an archaeological survey and excavation of his apartment. After that, he transcribed a Civil War diary of an ancestor for family members and then undertook a reading program of books published by people he knew, including by former graduate students of the William and Mary history department.

He was a tinker, carpenter, cook, musicologist who couldn’t carry a tune, rhymester, translator of Greek and Latin, dumpster diver, and packrat. As a handyman around the Institute, he made bookshelves, refinished desks and tables, and produced Lucite book stands by baking them in his oven. Don’t ask. His tamales were legendary, as were his chocolate chip cookie-muffins. His fruitcake, on the other hand, was inedible. He was an aficionado of the Baroque canon: Purcell was a favorite. Mozart he found insipid. He relished Chamber Music Society of Williamsburg concerts after his retirement in 2013. Though a classicist at heart in literature, he wrote a dissertation on modernism. Ford Madox Ford and Anthony Powell were high on his list. He was loath to let go of a carburetor-engined car, which he could fix, whereas computerized fuel-injection systems were beyond his reach. He had a taste for pipe tobacco, coffee, cars, mincemeat pie, and cats, though he had a soft spot for puppies, to whom he gave his old shoes. His daughter, Heather, was the apple of his eye.

Born and bred in Nebraska, Gil never ceased being a Cornhusker. At the mention of someone noteworthy, he would assert the person was from Omaha. He was always right. And he is one of them.