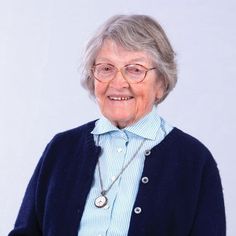 Lois Green Carr, preeminent historian of colonial Maryland, died peacefully at her home on June 28, 2015. She was 93 years of age.

Born on March 7, 1922 in Holyoke, Massachusetts to Donald Ross Green and Constance McLaughlin Green, Dr. Carr was a third-generation historian. She may be the only seven-year-old to have asked her mother to explain the medieval feudal system, an early hint of her lifelong intellectual curiosity. After graduating from Swarthmore College in 1943, Dr. Carr obtained her M.A. from Radcliffe College in 1944. In 1968 she earned her Ph.D. in History from Harvard, with her dissertation County Government in Maryland, perhaps the lengthiest (more than a thousand typed pages) and most detailed study of local colonial government.

After moving to Annapolis in 1954, Dr. Carr joined the Hall of Records (now Maryland State Archives) staff as a junior archivist in 1956. In 1967 she became Historian for Historic St. Mary’s City (HSMC), a position she retained for 45 years. She continued to work primarily at the state archives where she had ready access to the documentary records vital to her research. Her great passions were historical research and public history. She saw St. Mary’s City as her classroom, where the public could learn about the past by experiencing it in new ways. Dr. Carr founded the research program at HSMC; participated in the development of every exhibit at the museum, including numerous seventeenth-century reconstructions; and provided the key historical evidence for identifying the Calvert family members buried in lead coffins discovered under the 1660s Brick Chapel. Of them all, she perhaps had the greatest role in creating the Godiah Spray Tobacco Plantation, directly based on the research later published as Robert Cole’s World.

Internationally recognized as one of the leading social and economic historians of the colonial Chesapeake region, Dr. Carr co-authored and contributed to numerous books, articles, and papers, including Robert Cole’s World: Agriculture & Society in Early Maryland; Maryland’s Revolution of Government 1689–1692; Colonial Chesapeake Society; and Maryland: A New Guide to the Old Line State. She attended and participated in many conferences and symposiums in the fields of colonial social and economic history. As HSMC’s first historian, in support of the programming needs of an ambitious young museum, Dr. Carr undertook original research on a broader range of subjects than professional historians typically address. She believed that public history museums should offer interpretations adhering to the same high standards for quality and originality as leading academic institutions. As a result, a number of the research reports she produced for HSMC became the basis for books and articles making major contributions to the fields of political, social, economic, and women’s history.

Although modest about her own achievements, Dr. Carr was widely recognized and admired by her colleagues. She was president of the Economic History Association in 1990–1991. In 1992 a conference in her honor, held at the University of Maryland at College Park, brought together leading colonial scholars whom she had known and worked with during her career. The HSMC awarded Dr. Carr its highest award, the cross bottony1, in 1995 and she was one of the first two recipients in 1996 of the Maryland Humanities Council’s Eisenberg Prize for Excellence in the Humanities. In 2000, Dr. Carr was inducted into the Maryland Women’s Hall of Fame and in 2001 she received an honorary degree from St. Mary’s College of Maryland. Her co-authored volume Robert Cole’s World received numerous awards. Today, many of the articles and books she helped produce remain essential reading for all scholars of early American history.

Dr. Carr’s intellectual creativity and enthusiasm attracted numerous young researchers to the study of colonial Maryland history, a group often characterized as the “Maryland Mafia,” with Dr. Carr as its godmother. Her passion was to write and teach history for a broad public audience through museum programs rather than in an academic institution, but through her generous mentoring of dozens of younger scholars, Dr. Carr played a major role in shaping research, writing, teaching, and interpreting the history of the region. Many scholars owe her an immense debt for her invaluable advice on all stages of a project from research design to polishing a final manuscript. A demanding critic, Dr. Carr pushed scholars to aspire to high levels of achievement.

She was a pioneer in the field of colonial history, especially in the use of probate records to reveal the contours of the lives of ordinary as well as prominent people of the past. Her research approach—integrating archival history with archaeology and architecture—was considered novel at the time. And she was in the forefront of using computers to manage and analyze large amounts of historical data. Dr. Carr designed and directed several long-term team history research projects which won support from the National Science Foundation and from the National Endowment for the Humanities. One notable product of the work undertaken for HSMC by Dr. Carr and her project colleagues is the career file that documents every known seventeenth-century St. Mary’s resident, part of the research files maintained among the collections of the Maryland State Archives and HSMC.

Dr. Carr served as a Senior Adjunct Scholar at the Archives from 1988 until 2005. In 1989, she assumed the position of Senior Historian of the Maryland Historic Trust, continuing to focus her work on St. Mary’s City, an activity she sustained even after her retirement in November 2005. She was an adjunct professor of history at the University of Maryland College Park from 1982 until her retirement, and was a visiting professor at St. Mary’s College of Maryland in 1971.

In addition to her passion for history, Dr. Carr loved her Quarter Landing neighborhood, listening to classical music, gardening, cooking, entertaining guests, and participating in a play-reading group with her husband, Jack Ladd Carr, who preceded her in death in 2010. The couple regularly attended Annapolis Symphony Orchestra concerts and Colonial Players productions. Visiting colleagues always received a warm welcome at her home and Annapolis friends gathered at her annual Christmas party.

Dr. Carr was also preceded in death by her brother, Donald Ross Green, and her sister, Elizabeth Langford Green. She is survived by her only child, Andrew Clark, of Baltimore, Maryland; a nephew, Mitchell Green, of Washington State; and a niece, Alice Green, of California. She leaves behind many friends and colleagues who loved, respected, and admired her for the work that contributed so much to our understanding of early Maryland.

1 A “cross bottony” is a cross having each arm terminating in three rounded lobes, forming a sort of trefoil. From the religious point of view, the cross bottony can be used as a symbol of the Christian Trinity. A cross bottony which is heraldically “counterchanged” occurs on the flag of Maryland.