Jan Lewis served on the Omohundro Institute Council from 1996 to 1999. 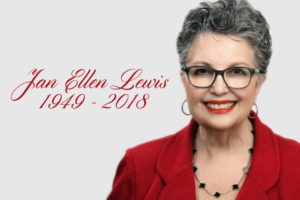 I didn’t deserve the kindness, friendship, loyalty, and unending generosity I received from Jan Ellen Lewis. We just happened to be fellows together at Monticello in 2002-03, when I was just another of Peter Onuf’s graduate students. But she just adopted me. It never mattered that she didn’t get anything for it, she just did. Over the last 15 years she’s written me dozens of recommendation letters, supported me in messages and posts that would come out of the blue, vouch for me all over the place, and always grab me for coffee with Barry Bienstock at conferences. (In fact, I write this while on a fellowship that I got in part because of one of her letters. Thank you again, Jan.) I never deserved it, but I loved and cherished every minute I had the privilege of being her friend. I liked the feeling of thinking about the next time I was going to have dinner with this fantastic couple.

There are parts (unfortunately small ones) of the historical profession that are simply beautiful, where really phenomenal people also happen to be astonishing interpreters of the past. When you have to stop yourself when you are enjoying their company to remember, oh, right, they are also these brilliant scholars, too. Jan was most certainly one of these singular people.

I have a reading assignment for you. Go and read her essay “The White Jeffersons” in the Sally Hemings & Thomas Jefferson volume (UVa Press, 1999). This essay is so beautifully rendered, so moving and deep and human, I’ve wept even after several re-readings. This is how grown-ups think and craft. We should all aspire to write like this. I made the mistake of telling her this after one re-reading for class. (She was militantly humble, too.) I reached out to say how I was again blown away by what a piece of writing it was, and to thank her for giving it to us. That someone as kind, generous, fun, and funny could also do THAT is not someone we can afford to lose.

Now, the second part of the assignment. Go read footnote 5 from Jan’s WMQ review of Kathleen Brown’s Foul Bodies (October 2011), where she summarily lists all the recent books that claim to be about something that “‘changed everything’ or sparked this or ignited that.” (It’s a long note.) “If you read only the subtitles of popular history books,” Jan wrote, “you would conclude that Americans must be continuously dizzy from the frequency with which everything has been changed, not to mention sparked, ignited, and created over and over again.” It’s an incisive point, but put in such a way that you get a glimpse of the sparkle that, when combined with a deep, powerful intellect, made her a singular scholar and human being.

I will miss Jan for the rest of my life. Having someone like her in my corner was a wonderful blessing and I will cherish it forever.

My deep, heartfelt condolences to Barry, and to her son James and his wife Aislinn, and especially to their daughters Beatrice and Ida who have been robbed of getting to spend lots and lots of years with their just kickass grandmother.