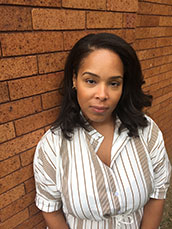 Shauna Sweeney is a historian of Slavery and Freedom, Gender, and the African Diaspora, and was the 2016–2018 NEH Postdoctoral Fellow at the Omohundro Institute of Early American History and Culture. She received her Ph.D. from New York University and teaches at the University of Toronto.

Dr. Sweeney is currently working on a book manuscript titled “A Free Enterprise: Market Women, Insurgent Economies and the Making of Caribbean Freedom.” In an era when violent subjugation to the plantation economy was enslaved peoples’ primary experience of Atlantic capitalism, they nevertheless vigorously defended a set of customary rights to cultivate, harvest, and sell goods from their own provision grounds. Significantly, it was enslaved black women who managed this trade—cultivating, transporting, and selling goods—and who confronted the attendant dangers associated with traveling to and from market. The entrenchment and codification of these customary rights spawned inter-Caribbean trade networks that reflected subaltern geographies extending well beyond the boundaries of plantations, towns, and islands. But the internal marketing system constituted an interstitial site of freedom born inside the belly of colonial slavery. Caribbean marketing systems subsidized slavery by easing the costs of social reproduction, even as they fostered an ethos of black autonomy that was hostile to racial slavery and the worst aspects of economic exploitation. From its origins in the late seventeenth century to its institutionalization in the eighteenth century, market women—enslaved, free, and fugitive—constructed physical pathways and social spaces that served as counter-hegemonic sites of black self-determination.

While at the OI, Dr. Sweeney undertook additional research at the British National Archives and at the National Archives of Jamaica, where she reviewed a broad selection of travelogues, diaries, material culture, maps, and legislation from seventeenth- and early eighteenth-century Africa and Jamaica. These sources can reveal the earliest iterations of the internal marketing system and the linkages between commercial practices in West Africa and the emergence of the gendered informal economy of the Caribbean.