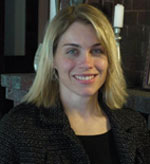 Laura Keenan Spero was an Institute Postdoctoral Fellow at the Omohundro Institute of Early American History and Culture (2012–2013). She resides in Williamstown, MA, where she is a research associate and adjunct professor at Williams College. She completed her B.A. in anthropology and history at Vassar College and earned her Ph.D. in history from the University of Pennsylvania in 2010. Her research and teaching interests focus on native North America, women and gender, and colonialism in the Americas. Dr. Spero’s dissertation, “‘Stout, Bold, Cunning and the greatest Travellers in America’: The Colonial Shawnee Diaspora” traces disparate Shawnee groups and individuals from their mid-seventeenth-century dispersal from the Ohio Country to Shawnees’ emergence as inter-native diplomats and anti-imperial activists in the middle of the eighteenth century. As far-flung Shawnee communities adapted to a variety of colonial contexts and forged a larger diasporic community, they not only remained connected to each other but also linked diverse peoples throughout a vast swathe of native America. In arguing that the emerging Shawnee networks provided foundations for inter-native, anti-imperial movements from as early as the 1740s through the better-known activities of Tecumseh during the War of 1812, this project sheds new light on the development and workings of so-called pan-Indian movements as well as on the experiences of Shawnees in early America in general. Dr. Spero has previously held grants and fellowships from the McNeil Center for Early American Studies, the University of Pennsylvania, the Library Company of Philadelphia, the American Philosophical Society, the John Carter Brown Library, and the Newberry Library.