The Stockbridge Mohican community—the only descendant community of Mohicans—has long known of the wealth of linguistic material housed in the Moravian Archives and in Box 331 in particular. Beginning in the late 1960s, community representatives led by sisters Bernice Miller and Dorothy Davids undertook a series of trips to libraries, historical societies, and archives in ancestral locations in order to build a collection for the newly founded Arvid E. Miller Historical Library/Museum (named for Bernice’s late husband) on the reservation near Bowler, Wisconsin (Figure III). The Stockbridge Mohicans descend from the community of Housatonic and Mahican peoples who in 1739 incorporated as a New England town, complete with a Congregational minister, John Sergeant. Moravian missionaries made contact with the Mohican community of Shekomeko several years later. The Mohican communities at Shekomeko and Stockbridge were bound by substantial kinship ties that persisted at least into the nineteenth century and continue to be remembered among the Stockbridge community today.8

During a trip to the Moravian Archives sometime in the 1970s, the group of Stockbridge visitors would have been guided to the Moravian Mission collection generally, and Box 331 specifically, for its wealth of Mohican-language material. Unfortunately, Miller and Davids’s hopes that the Moravian documents would provide an accessible source for recovering Mohican history and language were quickly dashed. Archival assistant Lothar Madeheim later related that Miller had visited from Stockbridge and left dismayed at how inaccessible the documents were because of the difficult German handwriting.9

It was Bernice Miller’s frustrations with the Moravian mission records that led her to seek the help of linguist Carl Masthay, though it is unclear how the two initially connected.10 A gifted independent linguist, Masthay attributed his interest in Native peoples and languages to his childhood in Tunxis, Connecticut. Masthay’s letters to Miller, housed in the Arvid E. Miller Library, provide periodic updates on his efforts to collect Mohican-language materials. In 1980 Masthay published the result of his efforts: a comprehensive, painstakingly edited collection of the Mohican-language texts housed in the Moravian Archives in Bethlehem, most of them from Box 331, but also including an important additional hymnal from the Moravian Archives in Herrnhut, then behind the Iron Curtain in East Germany, as well as a pronunciation guide. Masthay hoped his volume would provide the resources the Stockbridge community desired to further their efforts at language revival.11 Interestingly, Masthay deemed it impossible to restore the original hymn tunes to the texts and underestimated the extent to which Native residents contributed to the creation of the Mohican-language texts.12 Despite his efforts and his hopes that the project would assist language-revival efforts, the book still poses significant challenges to nonlinguists.13

In recent years, the language-revival efforts in the Stockbridge community have gathered momentum, as expressed in a recently funded grant to the Arvid E. Miller Library from the Institute of Museum and Library Services (IMLS): “Our language is part of our history, and part of who we are. It is a missing piece to a puzzle that has been scattered along a trail from the Delaware Basin to Wisconsin, but the members of this nation have survived, and have the resources to start using their native languages again.”14 Still, the task of language revival is fraught with challenges, which are significant enough to have led some Stockbridge members to focus their efforts on learning Munsee rather than Mohican.15 First, the last speakers of Mohican died in the 1930s, and those individuals were recalling a language they remembered their parents and elders speaking decades earlier. Second, the body of archival and printed source material in Mohican is limited and lacking a grammar. To address these challenges, the Stockbridge-Munsee Language and Culture Committee, including Marlene Molly Miller and Jeremy Mohawk, has done much to facilitate the incorporation of Mohican language in the community. The Stockbridge Mohican community has sought the help of non-Native linguists in their project, including, most recently, Christopher Harvey, a doctoral student at the University of Toronto.16 Chris is also collaborating on the Arvid E. Miller Library grant to produce a series of online classes to help community members study Mohican. Box 331 is one important source of Mohican-language materials.

Despite the wealth of materials in the Moravian Archives, if not for the work of historian Paul A. W. Wallace and archivist Carl John Fliegel, the documents and their enormous potential contribution to the study of Native American life and history might never have come to the attention of the wide range of scholars and Native community members who have made the trip to Bethlehem. Wallace, a Canadian-born historian of early Pennsylvania, worked in the Moravian Archives beginning in the 1940s with the assistance of Moravian bishop Kenneth G. Hamilton and archivist Samuel Gapp. From these forays Wallace published two articles in the early 1950s detailing the wealth of the Moravian Archives, followed by a lengthy series of publications rooted in these sources, many of which focused on the life and work of Moravian missionary John Heckewelder. Soon after Wallace’s visit, the archive received a grant that funded Fliegel’s efforts, as the newly hired archivist, to reorganize and index what came to be known as the Records of the Moravian Mission among the Indians of North America. Fliegel created the collection by removing thousands of documents (totaling nearly sixty thousand individual pages) from their original locations in the archive and rearranging them as a new collection in what was at once a telling act of segregation and an important recognition of the documents’ significance for Native American history. Presumably, the materials from communities such as Shekomeko, Pachgatgoch, Gnadenhütten, and Meniolagomekah once rested on the shelves of the Moravian Archives alongside records of New York, New London, Bethlehem, and Lititz in a rough approximation of the communities’ geographic relationship. Fliegel’s separation of the mission collection made it much easier for scholars interested primarily in Native history to access the relevant Moravian records, but the reorganization also reinforced a sense of separateness from the rest of Moravian Church life that does not reflect the centrality of mission work to the early Moravian community and the nature of relationships between Native and European individuals and communities. This separation also gives scholars a false sense of completeness: if they have worked in the mission collection, they might feel that they have seen all there is to see on the Indian missions. In fact, much remains in the broader congregational collections within the Moravian Archives.17

Fliegel created an organizational system as well as an astoundingly detailed index for the newly separated mission collection. Archivist Vernon Nelson oversaw the microfilming of the mission collection in 1970, for which he created the first finding aid. The labors of these archivists have been a boon to all who have attempted to make their way through the often-difficult German script.18 The first series in the mission collection is organized by community, with records related to each community collected into a single box containing multiple folders. The second series of boxes contains correspondence by Moravian missionaries, arranged by individual. The final series includes Box 331 and is organized thematically: account books, conference records, public affairs, the writings of Native Christians, and “Indian Languages, General.” Box 331 houses the bulk of the known Mohican documents, totaling 265 pages of material (Figure IV), while the next several boxes are devoted to other Native-language material, much of it Lenape (Delaware) and Muskogee (Creek). Fliegel’s arrangement replicates, although likely unknowingly, a shift that took place centuries earlier in the Moravian Church: Native communities once considered central to the church were now an appendix, albeit an important one. Still, Fliegel’s arrangement and separation of the Indian mission records facilitated research by scholars outside the Moravian Church fold, soon drawing the attention of leading voices in the “new Indian history.”19 This act of archival segregation also drew researchers from descendant communities who hoped to further projects of cultural and linguistic revitalization. 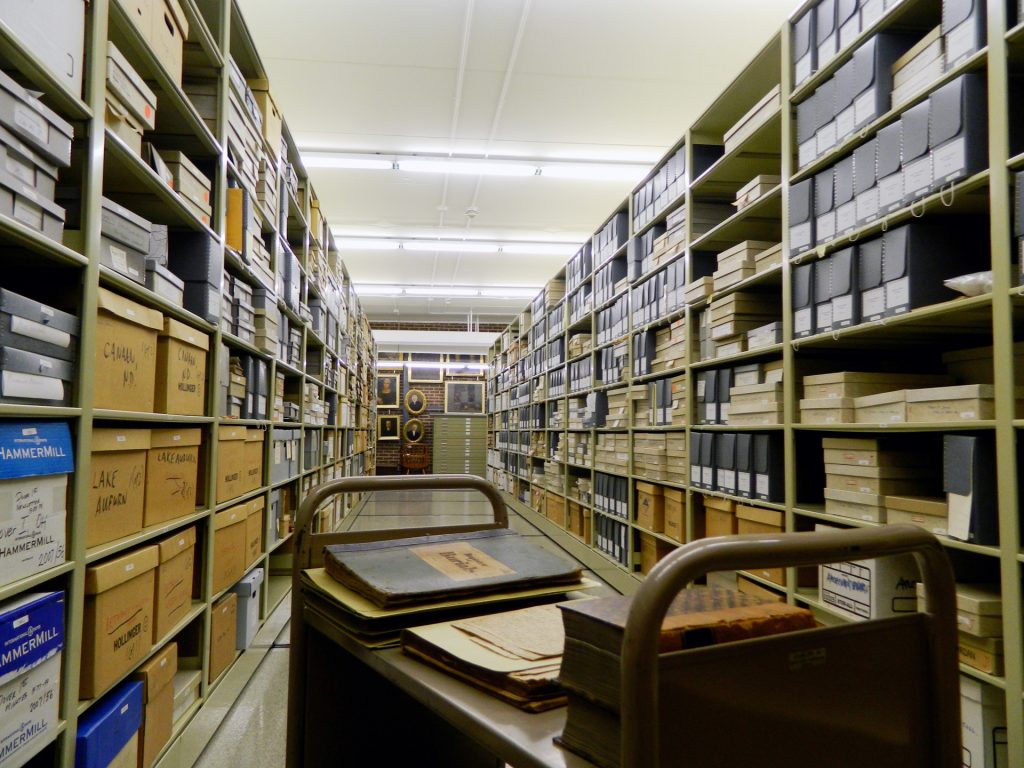